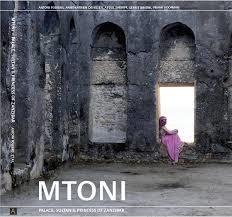 On the western beach of Zanzibar stand the impressive ruins of a palace. It was the seat of power of Seyyid Said, sultan of East Africa and Oman and it was here that the famous Princess Salme was born. Its name is Mtoni Palace. It was a major building complex on Zanzibar and it stands at the basis of the much admired Zanzibar building tradition.

​Archaeological and architectural research was set up to unveil some of this history and the results were published in a book. Although the building itself is now in ruins, the book takes the reader back to the times of Princess Salme to stroll through the palace's numerous halls, gardens and bathhouses in their nineteenth century splendour. Virtual reconstruction drawings, descriptions by eyewitnesses and stories from the fascinating memoirs of Princess Salme, these together build upon the existing structures and bring the palace back to life.

​The book contains essays on the history and architecture of the palace itself, on the father and on his daughter Sayyida Salem. Old engravings and beautiful full-page photographs connect the history of the palace to current Zanzibar.

​The book was edited by Antoni Folkers and Anne-Katrien Denissen and includes contributions from among others Prof. Abdul Sheriff, Gerrit Smienk and Frank Koopman. It is available at a number of hotel lobbies, shops and bookshops in Zanzibar and Dar es Salaam, or can be obtained via AAmatters.

​The research also gave reason for the start of a modest museum on the site, which was realised with the kind support from NMB Bank Tanzania.

​The research and publication wouldn't have been realised with the kind support of Nicola Colangelo and the Embassy of the Kingdom of the Netherlands.